I had the opportunity to go eat at the Detective Conan Cafe 2018 in Nagoya last weekend. This is a cafe that opens up around Japan when the annual movie comes out.

Up until now, I’ve only been to the Animate Cafe for Touken Ranbu events. This was the first time I’ve been to a non-Tourabu cafe and a non-Animate cafe.

How I Found it

Before, I’d just poke around the Animate Cafe site and hope something good was coming to Nagoya. Unfortunately, most of the theme cafes I’m interested in only go to Tokyo and either Osaka or Kyoto. But sometimes I’d spot an anime cafe that wasn’t affiliated with Animate while walking around Nagoya. Last year I actually saw a Conan cafe. This got me thinking.

I finally did a search for anime cafe ( アニメカフェ ) instead of Animate Cafe on google. Of course, Animate popped up at the top of the list, but after scrolling around I found the Collabo Cafe website. It’s only available in Japanese, but it lists a ton of different anime collaboration cafes. I put Nagoya in the search and BAM Nagoya cafes popped up. It’s an incredibly handy site.

How I Signed Up

I signed up on the Detective Conan Cafe website. The menus are in English but the site itself is all in Japanese. Click on “Reservation” and pick which location you’d like to visit. It costs 500 yen to reserve a seat.

Some cafes use a lottery system for you to get your seat, but the Conan Cafe doesn’t. It’s a first come first serve reservation system. You can pick any day with an opening and select an open time slot. Once you complete the reservation you have your seat at the cafe.

When I signed up, all the weekend slots were full. I managed to get a Friday evening slot so I could go after work and not worry about getting home late and being sleepy for work.

The Detective Conan Cafe 2018 is in a the kawara CAFE & KITCHEN in the Sakae part of Nagoya. It’s on the 5th floor of a department store called PARCO Nagoya. Unlike Animate Cafe, which is run by an anime shop, this is a regular cafe that has entered a collaboration to run the Conan Cafe.

It’s actually very close to the boundary between the Osu Kannon shopping arcade and Sakae. The nearest station  is Yabacho Station, but I actually got off at Kamimaezu Station so I could stop at Mandarake on my way to the cafe.

Waiting in line to be seated

One common thing among all the anime cafes I’ve been to is that you have to line up and wait to get in at the appointed time. This cafe was no different. It was inside a department store, so the line was indoors and cool, so it was quite comfortable. 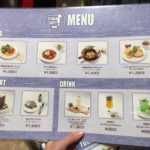 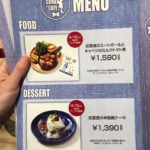 Menu of items from the anime

One thing to note is that you’re handed menus while waiting in line. You are expected to order before you are given your seat, so please be sure to figure out what you want. I decided to get a main dish, desert, and a drink.

The decorations were all very cute and stylish. I was one of the few people who signed up to eat alone. There were three of us total, but we were placed at a long bar-like seating area facing a wall with the main characters for the latest movie. I understand the logic for this, but it was kind of a downer to be facing a wall the whole time, even if it was a nice wall.

The food was good! Note that this was my first time at a non-Animate cafe and I was impressed. I guess I shouldn’t be surprised that the food made at a regular cafe would be really good. 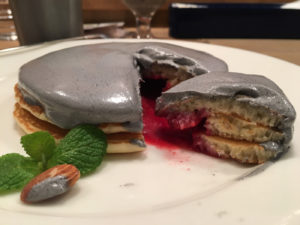 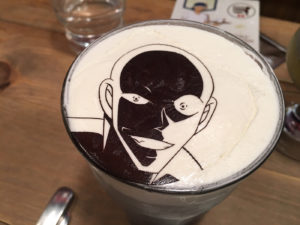 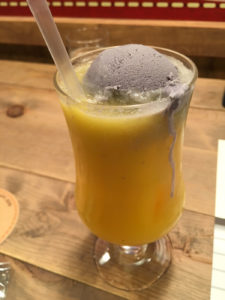 I ordered “Amuro’s Meatball and Cabbage in Tomato Sauce” that was featured in the episode of Conan that was broadcast on 4/15/2018. It’s the episode about the melting cake mystery. I also wanted the cake that was from the same episode, but it was sold out. Instead I got the “Culprit Dessert Set” which was pancakes with a fruit filling and creamy silver-colored sauce and a smoothie. For my drink I got “Amuro’s Triple Fruit Float,” which also came with a keychain. The keychain might’ve been a part of why I selected it.

One thing that did surprise me was the portion size. I noticed on the site that the prices were a bit high, but the portion sizes were significantly larger than Animate Cafe’s sizes. If I’d known this ahead of time, I might’ve ordered less food. At the end of the meal, I wanted to roll around like a balloon, but I had to walk properly to get back home to Gifu. I was stuffed.

This is something I didn’t order. I sat next to an older lady who was super nice and chatted with me and let me take photos of the stuff she got that was different from mine. She was cool. I wanna be a 40-something old lady who hangs out in anime cafes someday. She said this was her third visit.

While the food is good, one of the big draws of an anime cafe are the free goodies. I’ve met ladies at these cafes with huge collections of coasters. It’s intense. 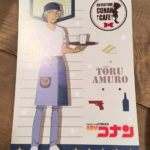 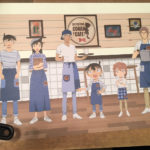 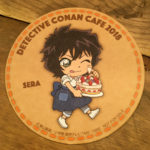 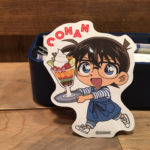 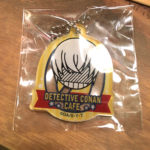 One is a large place mat that no one actually eats on to protect it. You also get a random sticker in a sealed silver envelope and a random postcard. 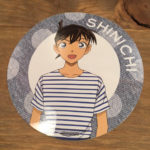 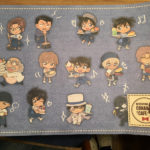 The lady next me got all the same stuff, but a different place mat and a different sticker.

One big disappointment was the lack of goods they still had for sale in the shop. I almost always buy a few cafe button pins for my work bag because they delight my students, but they were sold out of almost everything. These cafes are only open for a limited time and I visited when the cafe was almost over, so I guess it can’t be helped, but it was a bit of a downer. You don’t see this happen with Animate Cafe because, well, they have a huge anime shop they can sell extras in after the cafe is closed. This sort of cafe doesn’t have that luxury. Selling all the items before they close is probably a goal for them.

As I said before, it was pricey but the food was good! I find this acceptable because the portion sizes were pretty big for a cafe in Japan and I thought a lot of the food was well thought out and fun. I really enjoyed eating a dish I’d seen in an episode of the anime and I thought the pancakes were cute. Drinking the smoothie with the culprit’s weird face staring at me was a really funny experience.

I also liked that the designs were not just a bunch of character art posted around the cafe. There were a lot of cool Conan graphic design pieces around the cafe, plus the cafe’s normal wood plank design was very pleasant.

My only complaints are that the single diners were placed facing a wall and many of the cafe goods were sold out. It would’ve been nice to face inwards so I could see the other decorations while eating instead of the big poster in front of me. However, since the cafe wasn’t very big, it did make sense. Also, due to the temporary nature of this cafe, they probably don’t want any unsold goods when it’s finished.