On May 12, 2019, I was fortunate enough to be invited to the 7 year anniversary ceremony commemorating Fukui Masato-sensei becoming the 23rd soke of Muso Jikiden Eishin Ryu.

This ceremony happens annually at Inaba Jinja (JP) in Gifu City. I’ve been a member of Chubu Eishinkan for three years, but this was my first time being able to go. I was a little nervous because I had no idea what to expect.

I received the invitation post card about a month before the event. It was folded in half. One half is sent back after marking whether or not you’ll attend. It was my first time doing this, and I had to ask my husband to make sure I did it all properly. The other half contains the event details and is for you to keep. In addition to the reply card, attendees also had to send in 5000円.

Arriving at the Event

I got up early and got dressed for the event. Changing rooms were available, but I only live about 30~45 minutes from the shrine, so I went dressed in my black montsuki. I rarely have occasion to wear black montsuki (lady iaidoka often wear color montsuki), but the level of formality of the event required that attendees wear black. Swords were not necessary for normal attendees.

Parking was difficult at first. Inaba Jinja is one of the three most important shrines in Gifu City, so many people go there for weddings, tourism, to buy omamori, and more. In fact, after our ceremony was a wedding. It was a very busy day and there was a long line for parking. Thankfully there was a paid parking lot with plenty of open spaces.

Upon arrival, I checked in and received a list of attendees, a seating chart, and information. I made my way to the inner shrine and found me seat. I’m only renshi in Zen Nihon Iaido Renmei, so I was placed on the back row. There were about 50 attendees. It felt a little weird being in the inner chamber with the regular shrine visitors tossing coins in the coin box and praying behind us.

The order of events and the rules were explained while we waited. Photography was strictly prohibited save the gentleman in charge of photography.

The ceremony started with two Shinto priests and a miko walking in along with the 23rd soke. One priest beat the drum briefly and the other priest spoke to the group. He started off by blessing everyone in the room with the onusa (a wand with a lot of paper streamers called shide) and speaking with the kami. We had to bow our heads several times.

The miko did two dances, one with the tamagushi leaves and another with a fan and bells.

One interesting thing I noticed through the whole ceremony was how the priests and miko walked up the steps to the kami. It was pretty high up, so they had to do this odd walk a lot. Going up, they always walked on the left side and only stepped up with their left foot, placing the right one next to the left on the same step before stepping up with the left again. Come down, it was the same process, but with the right foot leading. I wonder if its polite to the kami to step up with the foot farthest from the center on the left.

After the prayers, everyone stood up and the 23rd soke offered a tamagushi to the kami. We all clapped twice and bowed before sitting again.

At this point, the soke did a short 3-waza embu (Junto Sono Ichi, Tsuigekitou, and Tatekitou), followed by four of the high ranking sensei’s embu.

At the end, we took our nametags off our chairs and and exchanged them for our gift sets at the reception hall, changed, and went home. Several of us also got goshuin.

The attendees received a bundle of gifts at the end of the ceremony. It contained an omamori and a food item from Inaba Jinja, a towel with the 23rd soke’s name on it, and manju.

Manju are extremely common gifts here in Japan. They’re a traditional Japanese sweet and they can be found at wagashiya. They’re also often given as celebratory gifts. I’ve eaten a lot of manju since moving to Japan.

But this was the most beautiful manju I’d ever seen.

Turtles symbolize long life, so these まんねんかめ (10000 year turtles) are featured on the box. This is not unusual. I was shocked to find when I opened the box that the manju were also turtle-shaped.

Dude checked online and the store is in Shizuoka: http://www.kamemanjyu.com/ 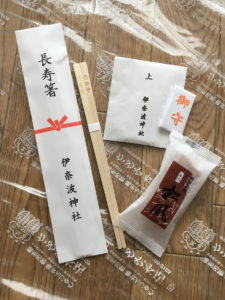 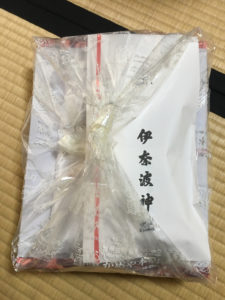 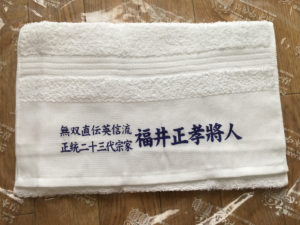 This was a fantastic experience. I often see my sensei, but I only have a few occasions to see him during formal occasions. Witnessing his embu in such a stunning shrine is an experience I will never forget.

Also, I always enjoy seeing my iaido friends. I see some of them regularly, but the Chubu region is very big. Even though we all live in the area, I only have a chance to chat with some of them at special events. I really enjoyed chatting with people while waiting to receive our goshuin.

Since this was my first time going to an anniversary ceremony, it was a learning experience. I actually didn’t own a black montsuki and had to hurry to the Osu Kannon shopping district in Nagoya to find one. I got lucky: the montsuki hakama set I got was in near-perfect condition and even had my husband’s kamon on it. Also, next time I need to arrive a little earlier.

I hope in the future I’ll have more opportunities to attend anniversary ceremonies.